A Library of tips, tricks, and informative articles - Fixes are for use under your own supervision and at your own risk.
Topic locked

The purpose of this article is to discuss the matter of Bundled Software ...

What is Bundled Software ?

Put quite simply, Bundled Software is any software that comes "free" with another program and installs automatically when you install the host program. It's usually something of doubtful utility, but since it comes with a program that you actually want, many people install it as a matter of course.

In most cases it's some sort of toolbar, that clogs up your valuable screen space, and offers you nothing useful in return. Often it will change your homepage and default search engine to something different than what you actually want. Many of them report your browsing habits.

Most of the "legit" toolbars can be uninstalled using Control Panel > Programs > Uninstall a program, but some less reputable toolbars need specialist knowledge to remove them completely.


The less reputable ones currently include ...

Why do producers include it with their programs ?

For the "legit" toolbars and programs, they get paid to do so.

Producers of "free" tools and utilities put a great deal of time and effort into creating them, and this is one way for them to get some sort of financial recompense for all their work. The "legit" toolbar producers pay them on a per install basis for every toolbar that gets installed with their program, and with a popular tool or utility, that could mean quite a nice regular income for its creator.

We do not criticise the producers for their actions, there's nothing illegal or even particularly immoral in what they are doing, but that does not mean we think you need to install the bundled software. In most cases there is an option not to install it, and we recommend you take it.

In the next post in this article, I will walk you through a typical install, and show you how to ensure the bundled products are not installed on your machine.

The less reputable bundled programs, are a different matter. They may well have been added without the producer's knowledge or authority.

Unscrupulous individuals often use popular tools and utilities as bait in a "honey trap" hoping to ensnare naive and unwary computer users. We get a lot of people coming to this forum, for help in removing infections that are contracted this way, so it's obviously a successful tactic.

How you can prevent it from installing on your computer ?

As we discussed in the last post, many free tools and utilities come with bundled software, which is installed when you install the host software. However with legitimate installs, there's usually a way to deselect the "additional" installs.

The purpose of this post is to walk you through the install of a typical free utility, in this case Foxit Reader, to show how you can avoid having the bundled software installed, in this case the Ask Toolbar.

As with all installs, you start by clicking on the installer file. 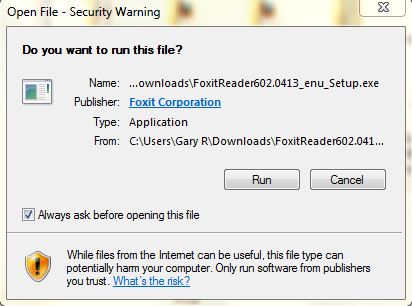 You'll then be notified by User Account Control (UAC) that a program wants to make changes to your system, and since you want to install the program, you'll allow them. 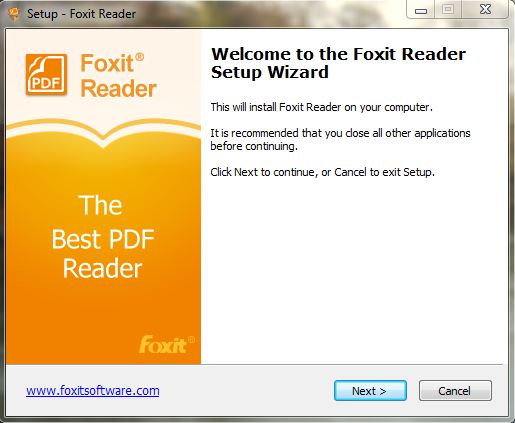 There will now be an introductory Window, with an instruction to hit Next to continue the install. 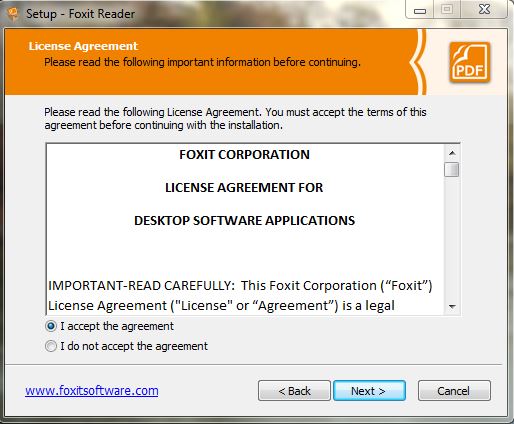 The next Window is usually the End User Licence Agreement (EULA). You should always read these, since they tell you exactly what you're signing up for when you install the program.

However, in this case the EULA is acceptable to you, so you make sure the I accept the agreement box is checked, then hit Next. 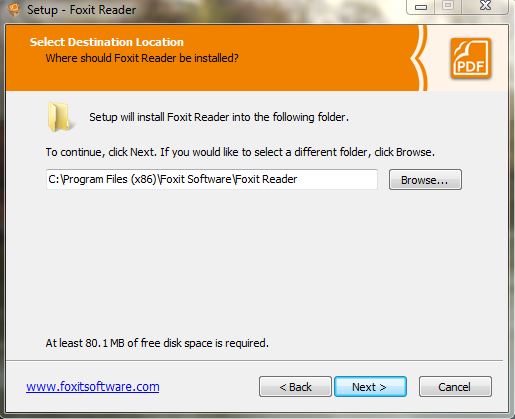 There will now follow a series of Windows asking you where you want to put the program, what settings (if any) you want to set up etc. etc.

Most people just accept the default settings and click Next, and you should too, but that does not mean you should not read what is written in the Windows, it is essential that you do not allow yourself to be lulled into the habit of blindly clicking Next ... 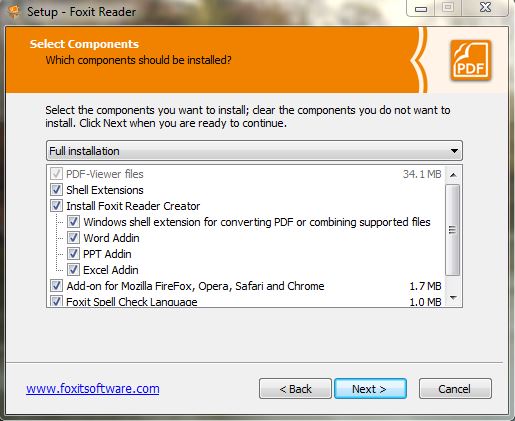 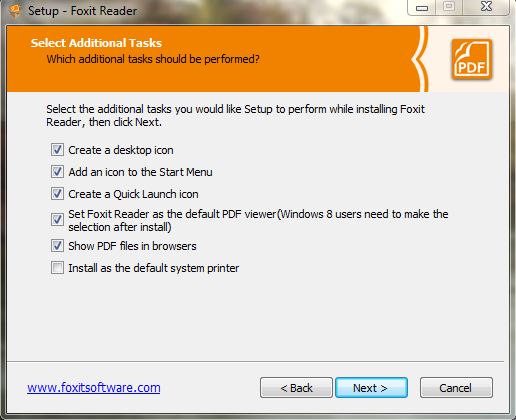 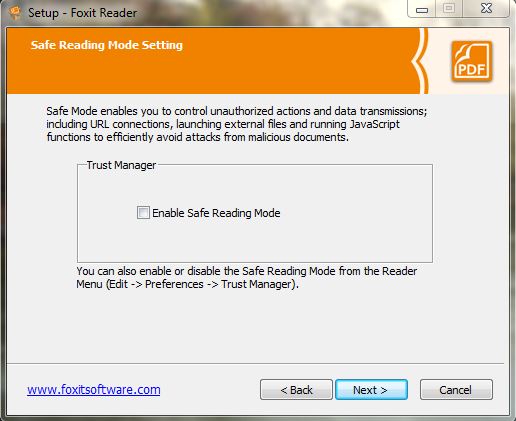 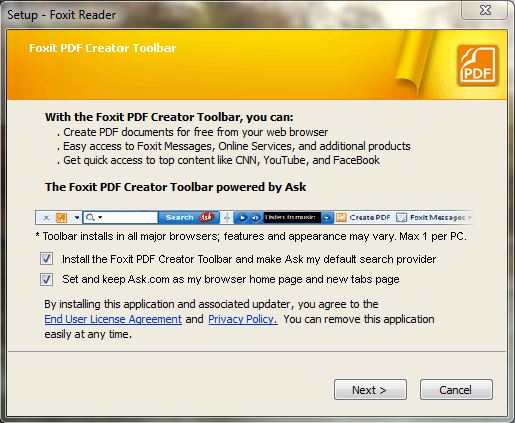 ... because hidden amongst all those Windows, will be one something like this. It will usually (but not always) be somewhere towards the end of the install, since the producer wants to have got you into the habit of blindly clicking Next, so that you'll install the bundled program that is going to make him some money.

You'll also notice that it's pre-checked for install. As I said, the producer wants you to install the program, so he's pre-checked it in the hope you'll just click through without reading what you've just agreed to install.

However, if you don't want to install this useless piece of junk (and who would), then at this point you should uncheck the two pre-checked boxes and then click Next 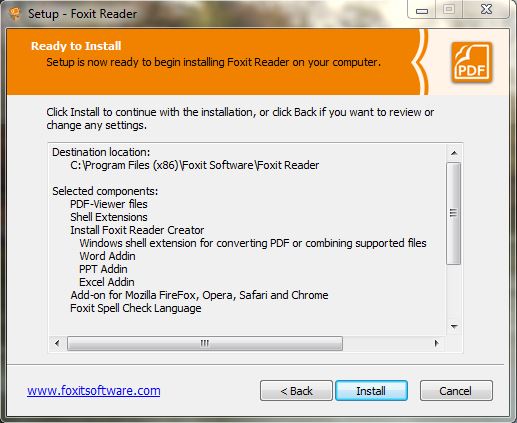 You can now proceed with the rest of the install, and the unwanted bundled programs should not be installed.

At this point I'd like to repeat something I said in my earlier post. The producer of the tool or utility you want to install is not acting illegally by doing this, or even immorally, though because of the way he's tried to manipulate your actions, his morals are perhaps a little questionable. He's just trying to earn a little money for all the time and effort he's put into producing his product.

Don't feel however, that you should therefore install the bundled programs so that he gets paid. If you want to recompense the producer, you might consider making him a personal donation, most tool and utility producers have PayPal links on their sites. Maybe if more people had made a personal donation for the product they're happy to use, he wouldn't have had to prostitute himself by including these junk installs with his product.

Recently ... a program has been created that automatically unchecks many of the pre-checked install options for you, so when you install some useful utility, you should not get the bundled "junk" that comes with it, its name is ... Unchecky ... watch the video and you'll see how it works.

Users browsing this forum: No registered users and 2 guests