This is the place for general discussions - we are a family site - no bad language, no flames.
A Moderators word is final.
Post a reply

Went to the punta Gorda Air show yeasterday with my son.

Highlights were: An F15 A P51 doing ground attacks..

P51 ( Mustang) racing a Pick up truck with a rocket engine in it. Truck won hands down. The damn truck was just a blurr going by at over 300 when it passed us. Top speeds were recorded at 375. Mph. Was incredible.

The Thunderbirds stole the show.
Best part.
As the show goes on they continually announce this is going to happen from the left and from the right... here comes so and so.
All of a sudden without notice or warning. An F16 passes right over the crowd at what seemed to be 100ft. I'm sure it was more.
For those who have never witnessed one of these machines up close and personal the approach is almost silent until there pretty darn close. Then when they pass you the noise from those engines is defening. Althogh your watching them leave as the sound finaly reaches you. My son hit the ground and almost took out the giy sitting next to him along with about 1500 others diving and ducking with a vengeance. Was the funniest thing I ever saw. Although I'm sure a few of the elderly didn't appreciate that.

If you ever have the opportunity to see them it's worth the trip.

Heres some of what we saw.

http://www.youtube.com/watch?v=DE-A4rLyWW8
In fact during a carnival waiting for them to show up (very heavily pregnant )
they came from behind me very low very loud and sent me into labour

At least i watched them waiting for the ambulance

We get the RAF Leuchars air show every September, the base is just five miles away. I went into the airfield once in recent years but usually opt to park the car half a mile away at a friends riding school, as the planes do the turns over our heads.
Love the sound of the new Typhoon. Nice and deafening.
Still waiting on an Apache making an appearance, and the Yanks sending an SR-71 and a B2. (That will never happen)

I keep missing the air shows around here. Every darn year we look up the dates put them on the calendar, then when we look at the calendar again they have passed by. Kids will do that to ya.

Here is something cool. Try to keep up
My wife's grandad's new wife (several years now). Anyway her son-in-law has just moved up to the captain's seat on one of the last flying B-17 bombers.
Here is a pic of one. Not the one he flys. 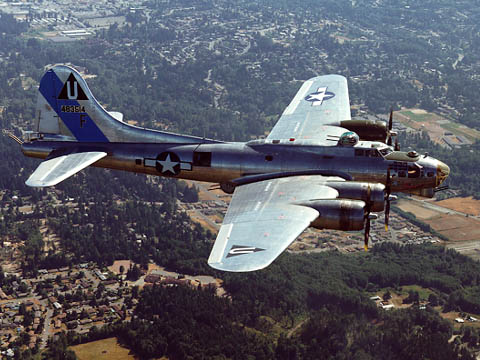 When I was a kid I built a model of one. Took some small electric motors I had put them in the wings where the engines go. Drilled holes in the plastic props, glued them on the motors, and hooked everything up to a model train transformer. When I cranked up the motors the 4 motors would drag, yes drag, the plane across the table. The wheels didn't roll.

Can't wail till it comes around here again. I might even have to take a flight in it. Last time I checked it was about $350us for a 30 minute flight.

blackmirror wrote:
In fact during a carnival waiting for them to show up (very heavily pregnant )
they came from behind me very low very loud and sent me into labour

My Marine Corp brother works on the avionics on Harriers for a training group. Been doing that since the early '90's. I got to look in the cockpit of one. The intake for the engine is huge

Scotty wrote:Still waiting on an Apache making an appearance, and the Yanks sending an SR-71 and a B2. (That will never happen)

I love the SR-71's. There is one at the Space and Rocket Center in Huntsville, AL. Really cool to see up close. Did you know the fuel tanks leak while on the runway. Immediately after take off they have to refuel and once the get up to "speed" the hull heats up and the tanks stop leaking.
Here is a link to a bunch of pics of it:
http://www.sr-71.org/photogallery/blackbird/06930/

I like to go over to the ranges at Donna Nook (Lincolnshire) and watch the live practice firing.

Best ones are the A10 Thunderbolts, the sound of that gun is amazing.

Users browsing this forum: No registered users and 17 guests